A MEET GATHERING OF

LOCAL LEADERS WITH A GLOBAL VISION

A MEET GATHERING ING OF

LOCAL LEADERS WITH A GLOBAL VISION

On October 4th and 5th, The TV Summit - LA Cumbre TV reaches its eleventh edition and is back to the streets, auditoriums and restaurants of New York.

We live in a moment of acceleration of a technological and economic transition of the advertising ecosystem impacting TV channels, agencies, research companies and brands.

In this environment, TV [TOTAL VIDEO] has advanced to strengthen brands with successful projects on various [MULTI] platforms to large [MASS] audiences.

Hence the importance of bringing together industry leaders one more time in a high-level forum for a broad debate that seeks to be at the forefront of trends, alliances and development opportunities, as well as maintaining and strengthening the connections between key executives of the Latin American industry who are responsible for projecting the future.

As in previous editions, the event and the Premio (Award) have the support of Centro TV Internacional channels: Unitel and Red Uno from Bolivia, Globo from Brazil, Canal 13 from Chile, Caracol and RCN from Colombia, Ecuavisa from Ecuador, TCS from El Salvador, Televicentro from Honduras, Channel 5, El Nu9ve and Las Estrellas - Televisa of Mexico, Telemetro, RPC and OYE TV - Medcom from Panama, América TV from Peru and local entities of the communication industry.

The event is by invitation and space is limited. Discounts and special hotel rates available until August 22.

LA Cumbre TV / The TV Summit is an invitation only event. Invited guests receive an e-mail with all information necessary to register. If you have not received your personal login and wish to register your interest in participating in the event, 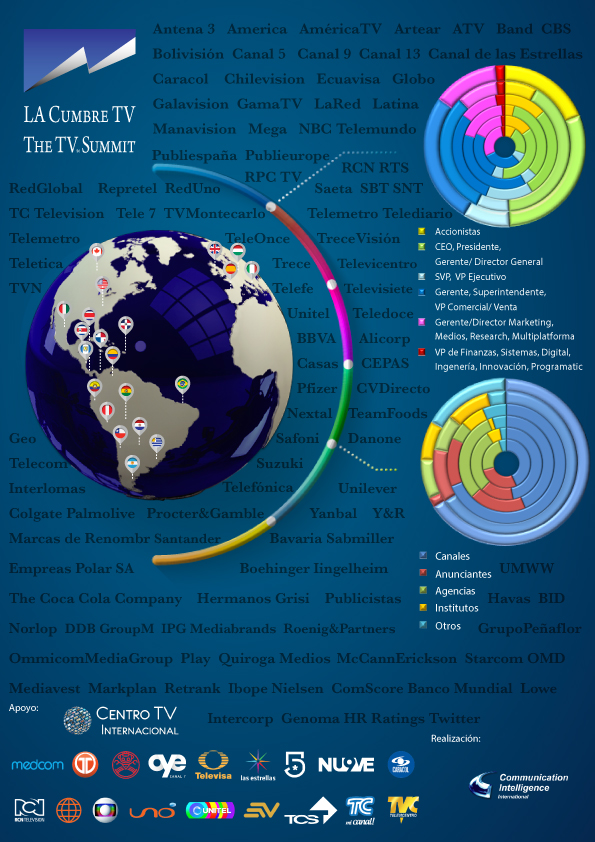 IN CASE YOU HAVE NOT RECEIVED YOUR LOGIN INFO IN CASE YOU HAVE RECEIVED YOUR LOGIN